Died and buried at Olburgen in the church cemetery.

The man who, like his predecessors, Father Nijkamp and Father Herfkens, documented the miraculous life of Dora Visser.  Furthermore, he accommodated Dora and her sister Johanna in his own home for twelve years. 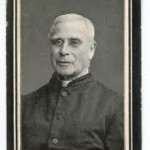 For almost 23 years he was also Dora’s confessor.  After Dora’s death, Teus Kerkhof put all of Dora’s things in a pillowcase which he hid in a bookcase, in the hope that sometime someone would put it to good use.

The following things were found in the pillowcase:  notes about the whole life of Dora, her hair, her Communion cloth and her cap.  All of these things are preserved in the Catholic Documentation Centre in Nijmegen.