This daughter of an industrialist was born on 3 January 1819 in the German city of Aachen.  Her godfather was Emperor Frank I of Austria.  Clara Fey (died 8 May 1894) and Blessed Paulina von Mallinckrodt (1881, Feast Day 30 April) were her school friends.  In 1845 she founded the Congregation of the Poor Sisters of St Francis.  They did all sorts of charity work.

Thus Franziska stood at the helm of refuges for women and houses of correction.  The order spread in Germany and the United States.

Franziska Schervier died on 14 December 1876 at the age of 55 in her place of residence.

She was solemnly transferred to the chapel of the new mother house of the Poor Sisters in Aachen on 14 September 1896.

Franziska Schervier was beatified by Pope Paul VI in a festive liturgy in St Peter’s Basilica, Rome, on 28 April 1974.  The canonisation process began in 2008.

The warm-hearted relationship between Franziska Schervier and Dora Visser

A premonition by Dora Visser of the healing of Franziska Schervier

A premonition of a healing, made by Dora and recorded in writing by Kerkhof, concerns the Superior General of the Poor Sisters of St Francis in Aachen.  There is a warm faith connection between Dora and this sister (Franziska Schervier from Aachen).  The Superior and her co-sisters visit Dora and her sister regularly and they pray for each other.  At one point in time Sr Franziska becomes gravely ill.  Critically ill!  A messenger comes from Aachen to Gendringen to inform Dora of this and to ask her prayers.  Dora is shocked by this message and immediately begins to pray.  Soon after, Dora tells Fr Kerkhof that in an ecstatic moment Mother Mary has given her the following advice:  “Gather white tree moss, sow it into a small bag and lay it on the chest of the patient.  Tell her this.  And it will also be good that you (Fr Kerkhof) will go there to speak with the Superior”.  Fr Kerkhof writes the advice down and gives it to the messenger to bring back.

In Aachen, the remedy is considered strange and no-one dares to tell the patient of anything to do with “white tree moss”.  Upon his visit, Fr Kerkhof hears that the sisters considered it an odd advice, but that they even so that morning had gone looking for white tree moss.  The curate tells the critically ill Sr Franziska that in an ecstasy Mother Mary had told Dora that she would recover.  “And”, as Kerkhof records in his journal, “I spoke with this patient the whole evening without hindering or tiring her.  And, that same evening, feeling the illness subsiding, she got up, to the great amazement of her sisters, not to mention their joy, and the even greater wonder of the doctors.  And behold!  Franziska very quickly recovered, and could resume her many and difficult duties, and even lived longer than Dora herself:  she died half a year after Dorothea Visser.  As to the healing, I will make no comment, but all I want to say is that it is certain that Dora also predicted this miraculous healing.”  The curate emphasises repeatedly that he has a remarkable story to tell, but that he only says that which “he has experienced himself and personally encountered”. 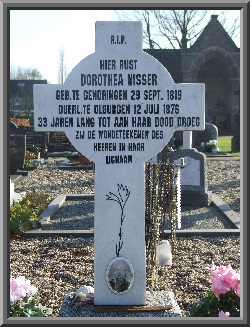